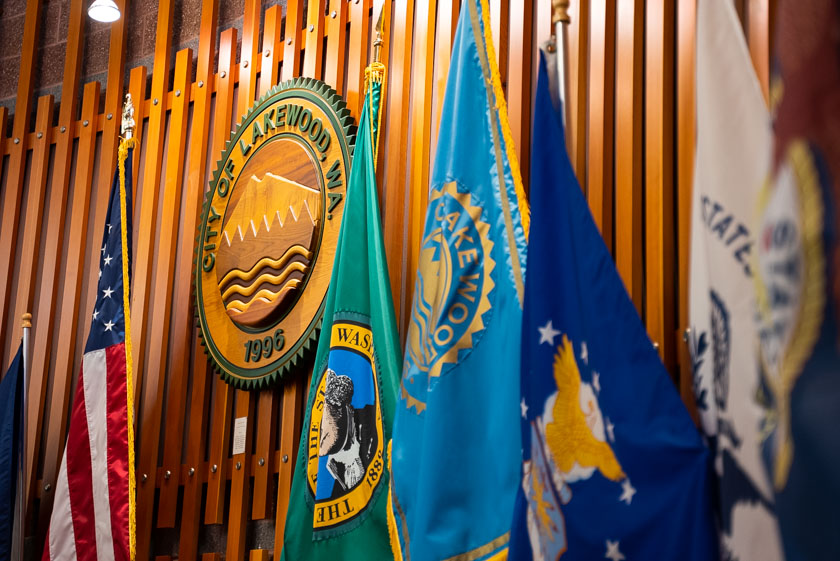 Chief Zaro presented two awards. David Boyd was awarded the Police Chief’s Citizen Commendation for 17 years of service on the Civil Service Commission, a citizen body that assists in the selection, advancement, and employment of police officers. Sgt. John Fraser was awarded the Police Chief’s Commendation Award for his potentially life-saving intervention to care for a homeless couple during the summer heatwave.

“Every officer here, including me, has been on a hiring list reviewed by (David Boyd). He helped to build this department from the ground up. He’s been here for 17 years, working as a volunteer, to make sure that Lakewood’s hiring and promotional practices met the highest standards… I’m honored to work with you and call you a friend.”
– Mike Zaro, Chief, Lakewood Police Department The Council approved a resolution for four affordable housing units to be included in a proposed 36-unit apartment project on Gravelly Lake Drive, to be called “Gravelly Lake Meadows”.

The City is negotiating with Waste Connections on behalf of customers whose yard waste was not collected on Dec. 27; more than two weeks have passed since the last collection and those customers are due a credit. The customers will be credited automatically.

The Tacoma-Pierce County Health Department recognized the City of Lakewood with a Healthy Communities Award for its work to publish an Energy & Climate Change chapter into the City’s Comprehensive Plan.